We are joined by author and educator Anna Lappé. Anna is the author of the lauded environmental book Diet for a Hot Planet: The Climate Crisis at the End of Your Fork and What You Can Do About It. For those not already familiar with her fascinating career, Anna Lappé is a passionate and outspoken advocate for sustainable, real foods and systems of food production. Anna is well known for her television documentary work, and as a featured expert on numerous television and radio shows. As head of the Real Food Media Project, Anna’s major focus is activism as she builds grassroots awareness of sustainability and real foods, using the power of storytelling.

In this discussion we’re focusing mainly on issues around commercial messaging, especially for food marketing purposes, and in particular we’ll talk about the issue of targeting children with those messages. We’ll talk about some of the more subtle ways in which messaging is targeted at children, and just how this makes the current public communications environment a very difficult one for those who are trying to parent responsibly.

Anna Lappé is a widely respected author and educator, known for her work as an expert on food systems and as a sustainable food advocate. The co-author or author of three books and the contributing author to ten others, Anna’s work has been widely translated internationally and featured in The New York Times, Gourmet and Oprah Magazine, among many others. Named one of Time magazine’s “eco” Who’s-Who, Anna is a founding principal of the Small Planet Institute and the Small Planet Fund. She is currently the head of the Real Food Media Project, a new initiative to spread the story of the power of sustainable food using creative movies, an online action center, and grassroots events.

Her latest book, Diet for a Hot Planet: The Climate Crisis at the End of Your Fork and What You Can Do About It, was named by Booklist and Kirkus as one of the best environmental books of the year. Anna is also the co-author of Hope’s Edge, which chronicles social movements fighting hunger around the world, and Grub: Ideas for an Urban Organic Kitchen, showcasing the ecological and social benefits of sustainable food with seasonal menus from chef Bryant Terry.

Anna can be seen as the co-host of the public television series, The Endless Feast and as a featured expert on PBS’s Need to Know, the Sundance Channel’s Big Ideas for a Small Planet and the PBS documentary, Nourish. 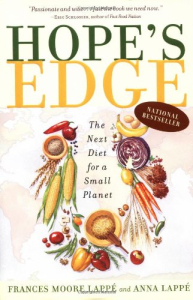 Edward Bernays, the nephew of Sigmund Freud, is widely recognised as the father of propaganda and public relations, and the grandfather of the modern advertising industry. Bernays adapted Freud’s psychological insights to create communications techniques that could manipulate vast numbers of people at the unconscious level into behaviours they would not have considered otherwise. His techniques were quickly adopted and advanced in the early 20th century by corporations, were embraced and refined in Nazi Germany and are used at an even more advanced level in 21st century communications and politics. His process involved the reframing of our personal identities from being members of our communities to a focus on the “self” and the reframing of people from being “humans” to being merely “consumers” of whatever elite groups offered up for their consumption.

Adam Curtis’ acclaimed BBC documentary series examines the rise of the all-consuming self, now recognised as “the consumer”, against the backdrop of the Freud dynasty.